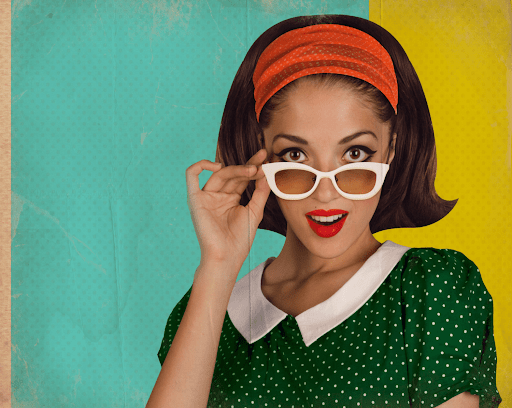 Style and fashion change just as the world does—celebrities, historical events, and cultural shifts can influence what we wear and how we wear it. Fashion trends can change quickly, especially with frames, lenses, and sunglasses. It’s best to appreciate the past when looking at how styles can change with time.

Continue reading to learn more about glasses through the decades, including popular styles from the 50s, 60s, and 70s.

The 1950s are well known as a post world war era where many iconic stars emerged, including Elvis Presley and Marilyn Monroe. During this decade, fashion began to change, and many styles became popular, including horn-rimmed glasses, cat-eye glasses, and aviators.

While horn-rimmed glasses are considered 1950s-style frames, they actually became popular in the 1920s due to film stars. These glasses faded during the 30s and 40s but exploded back onto the scene in the 50s. These glasses were the signature look of Buddy Holly, who defined a decade with his music.

Horn-rimmed glasses have their name because they look similar to the natural look of animal horn material.

Cat-eye glasses are one of the most popular styles, dating back to the 1930s. Originally designed to offer a fashionable design for women’s glasses, these frames accentuated the browline while adding an upsweep at the edges of the glasses.

While these glasses have thrived every decade, the 1950s cat-eye look is one of the most iconic. Popularized by Marilyn Monroe in her movies, these frames were narrow and pointed. With time, these glasses became more oversized as stars like Audrey Hepburn wore them in the 1960s and beyond.

The aviators are one of the most iconic designs for sunglasses—well known from Top Gun in the 1980s and other films and shows. However, these weren’t always a fashion statement. Aviators were mainly used for function in the late 1930s to protect pilots’ eyes from the sun when flying.

While people started to notice the aviator design in the 1940s due to popular photos of General Douglas MacArthur, aviators became more fashion-focused in the 1950s. Celebrities like Marlon Brando wore aviators out in public, and the popularity of these sunglasses soared.

The 1960s were a time of change, from the sleek and subtle glasses designs of the 50s to the intense looks of the 70s. Many people began wearing bolder styles, such as Mod style clothing and glasses, which hit the United States when the Beatles and other British bands became popular.

Two diverse styles from the 1960s include browline and wide rim (teashade) glasses.

Browline glasses feature a bolder upper part of the frames to mimic a person’s eyebrows. These frames were popular in the 1950s and continued into the 60s. Malcolm X was a particular lover of these glasses, who reportedly owned many pairs in different colours.

Browline glasses started to lose steam in the latter half of the 1960s as people began to crave bolder and more customized options, which is evident in the 1970s styles.

Wire rim, also known as teashade glasses, became popular in the 1960s because of celebrities like John Lennon. These glasses were considered rebellious and commonly associated with free thinkers during the anti-war movement.

The 1970s were a period of changing times, especially in eyewear. The 1970s had a flair for the dramatic, featuring oversized, fashionable glasses. Round or geometric shapes were very much in style, popularized by celebrities.

The 1970s explored eyewear uniquely, where people began seeing glasses as fashion accessories rather than a way to see more clearly. Some classic 1970s styles include butterfly, square, and double bridge glasses.

Butterfly glasses were a women-focused style worn by celebrities like Olivia Newton-John. These oversized glasses were symmetrical, designed after the look of a butterfly.

Large square glasses were a significant change from the sleeker wire frame glasses of the 50s and 60s. These chunky plastic frames were oversized and helped accentuate round faces.

Double bridge glasses borrow from the style of aviators, helping improve the resistance of the frames while staying fashionable. The teardrop shape of the lens made these glasses wider than others. These glasses remained popular well into the 1980s, providing a geekier look that’s vintage today.

What’s Next in Style for Glasses?

It’s safe to say that no one knows what the future will look like for glasses, but optometry offices are always keeping their finger on the fashion pulse to find new stylish trends. Fashion tends to be a cycle, so don’t be surprised if old classics make their way back into the mainstream. Contact your eye doctor at Visionary Eye Centre if you’re looking for new frames or lenses.

Do Contact Lenses Dry Your Eyes? Can an Optometrist Diagnose Glaucoma? Can You Use Eye Drops with Contacts? Does Macular Degeneration Run in Families? Glasses Through the Decades: Glasses Styles from the 50s, 60s, & 70s Do Contact Lenses Expire? Can Sun Glare Damage Your Eyes? How To See Better When Driving at Night Does Squinting Mean You Need Glasses? Common Eye Problems in Kids & Symptoms 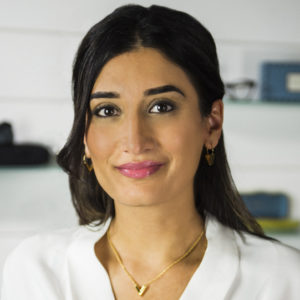 Born and raised in Edmonton, Dr. Sonia Delhon has co-owned Visionary Eye Centre since 2011, also acting as an in-house optometrist. Her education began at Concordia University, graduating with dual degrees, a Bachelor of Science and a Bachelor of Arts in Psychology. She was then accepted to the New England College of Optometry in Boston, MA. Dr. Delhon completed her clinical rotation in a veteran’s hospital in Connecticut, a pediatric clinic in Vancouver and a term specialized in ocular disease in Boston. During her spare time, Dr. Delhon enjoys travelling to new places, reading a great book, and playing badminton competitively.

Leave a Review
Read All Reviews